You are here: Home / Art /Jim Green/ Pelican Ahoy!
Back to Art 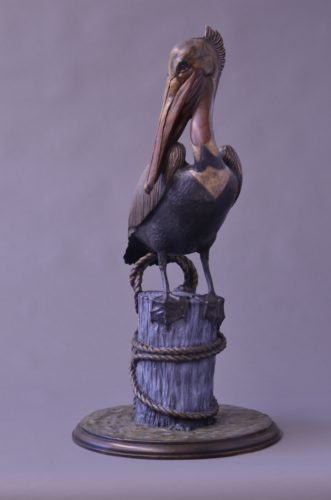 Even as a kid I was always fascinated by pelicans.  Growing up in landlocked South Dakota, pelicans always seemed like an exotic bird seen only in National Geographic movies.  When I first saw one on a Lake Oahe it was like  having a children’s book come to life, it is still somehow that way every time I see one.

The pelican, and the brown pelican in particular, is also a symbol of both the precarious nature of our environment and it’s resilience.  Once the brown pelican was very plentiful on the coastal US. In the late 1800‘s due mostly to hunting pressure Pelican Island became the last rookery for brown pelicans on the East coast of Florida.  In 1903 President Roosevelt signed an executive order establishing the nations first federal bird reservation and setting a precedent for the national wildlife refuge system.  In the 1960‘s the brown pelican was nearly driven to extinction in Louisiana because of pollution and in the 1970‘s it was placed on the endangered species list in California/Nevada due to DDT.  This species has recovered (to an extent) but is now in trouble again with crippled birds and declining numbers throughout it’s migration areas due to pollution and global climate change.

Still, despite these grim facts it remains that this is one of the most charming birds from coast to coast.  This large exotic looking bird, standing on the pier piling, regally proud (with that ridiculous mohawk sticking up but somehow not spoiling the mood) makes me smile every time I look at him.

This piece is my hope that we will still be able to witness this beautiful bird on our lakes or skimming gracefully over the ocean waves many generations from now.

Please visit my web site for more photos and information.

Proud to be Puffin Marsh Song
Scroll to top